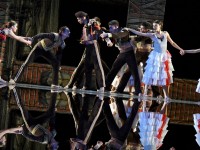 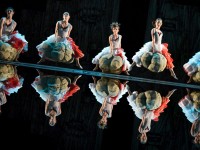 Carmen.TV
About the showShow Hide

The generally known story of the Gypsy girl, the heroine of Prosper Mérimée's short novel, has found a new and unexpected interpretation in this ballet.

The innovation choreography of Radu Poklitaru filled the stage existence of the characters with poignant intonations of today, preserving, at the same time, the charming atmosphere of the XIX century Spain, while the great music of the opera "Carmen" helped create an absolutely new production, with the spirit of Georges Bizet never violated.

The scenery and costumes designed by the renowned theatrical artists Andrey Zlobin and Anna Ipatieva fill the stage space with the vibrating rhythms of the XXI century interwoven into the atmosphere of old Spain.

The ballet "Carmen.TV" was presented on tours in a number of cities and towns of Ukraine, as well as in Rumania, Moldova, Belorussia and the Netherlands.

Media about the performanceShow Hide
In March 2006 the production was honored with the “Kyiv Pectoral” prize in two nominations: “the best production of the year” and “the best work of the choreographer”
Languages
UARUEN
Networks